Scheduled JUST FOR YOU! A Special Sagas Mystery Event Saturday, November 2nd at 10am!

BOOK EARLY for this specially scheduled SAGAS MYSTERY at www.sagas.tv!

(And, if it's better for your schedule, we do still have tickets for THIS SATURDAY EVENING, October 26th at 7pm!) 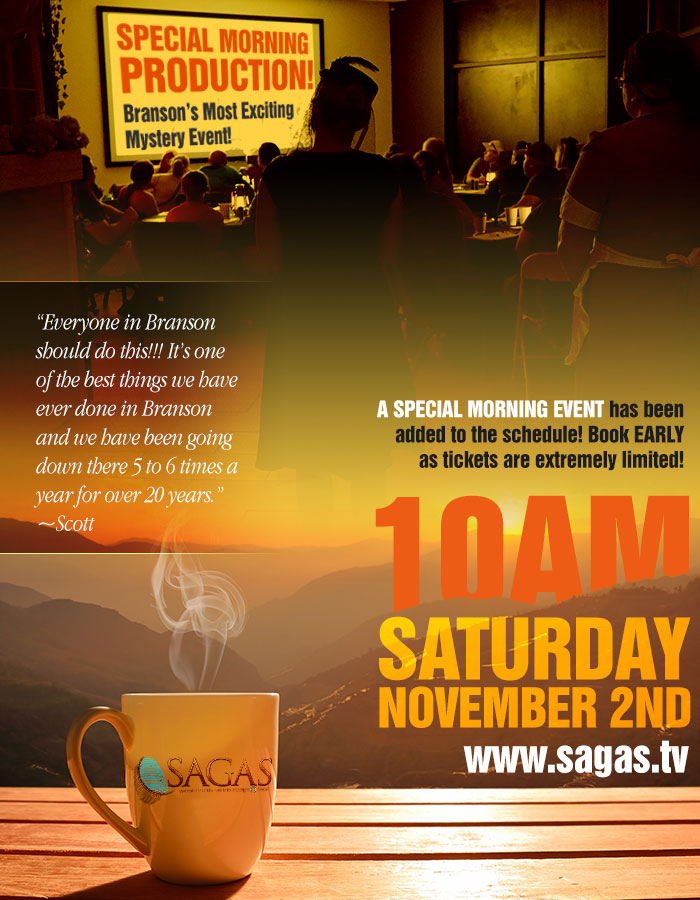 BOOK EARLY for either event, this Saturday at 7pm or the special 10am production on November 2nd at 10am HERE!

What can I expect at Sagas Mystery Events?

Sagas is a unique compilation of mystery theater and escape games. Whether you are looking for a fun team-building activity or you just want a little after-dinner entertainment, Sagas will prove to be an event to remember. The affair begins with hot drinks and sweet treats as you get ready for a night of mystery solving. Then grab a flashlight, hunt for clues in the 3200 square foot property, discover secrets and solve puzzles as you rush to unravel the mystery! You may encounter live actors as you move from room to room, but trust no one. There is a killer among you!

Sagas is the perfect event for groups, birthday parties for adults and older children (aged 8 and over), school and church groups, corporate groups and anybody looking for a one-of-a-kind adventure.

Specifically designed for groups of 2 to 40 players, you will interact with live actors, enjoy coffee, tea and treats and spend approximately two hours solving the mystery.

EXACTLY WHAT HAPPENS DURING A SAGAS MYSTERY?

Since the Sagas Mysteries concept is NEW to most, we thought it would be helpful to precisely explain what you can expect during your adventure! Many say it's similar to a live version of the game Clue. Add to that a unique escape game element, and that's about right!